Home » Dojo Highlights » The Tall and Short of It 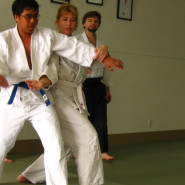 The Tall and Short of It

Posted by aikidoesc on Apr 13, 2015 in Dojo Highlights, Featured, The Dojo Posts | Comments Off on The Tall and Short of It

I’m too small. I’m too big. I’m too young. I’m too old. Too short… too tall… out of shape… overweight… not strong enough…

Many have the misconception that they have to be or look a certain way in order to take Aikido martial arts training. The REAL tall and short of it is this… Aikido is for all ages, all sizes, all fitness levels, all “weight classes”, men, women and children. Because Aikido does not rely on directly confronting strength with strength but rather emphasizes skilled maneuvering, it enables a small person to effectively control a large person. A 60-year-old woman can control a 20-year-old man; a less strong or lightweight person can control a stronger, heavier opponent.

Through the precise use of leverage, inertia, gravity, timing and the action of centrifugal and centripetal forces,  it is ultimately the energy of the attack itself which brings down the attacker. The physical skills of Aikido include entering, blocking or avoidance movements, followed by throws or holds. The system works because each person’s power is optimally utilized to lead the opponent in circles. The opponent essentially throws himself.

Increased stamina, flexibility, reaction timing and muscle development occur naturally as a result of Aikido training, but the techniques themselves do not depend on strength for effectiveness; Aikido can be practiced by men and women of all ages and physical ability.

So, now what’s holding you back? Request a free class or stop by the dojo during a class to observe!

Children’s Classes are open to children between 6 and 14 years old. Class size is limited. Please check to see if enrollment is open by visiting our class enrollment page or by calling 760.738.8022.
View Calendar 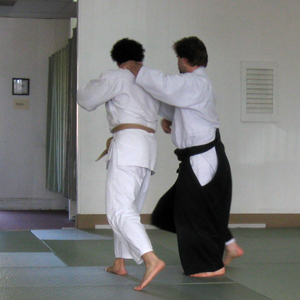